As hillwalkers, we visited Jura about l2 years ago.  I had only been in Scotland a couple of years and about six of us set off from Craighouse one weekend to climb the Paps of Jura.  I couldn’t believe so many bottles of  whiskey could fit into a rucksack.  We camped after a few hours walking north.  That evening some of the guys stripped off and showered under the waterfall (one was ginger from head to toe) and afterwards everyone (except me) was falling down drunk.  What a bunch of  rugged guys these Scots were!  We never made it up the Paps the next day – everyone was too hungover.  (Stew had been over them anyway in his twenties).  Now we return by sea kayak.

We took the ferry all the way across to Feolin on Jura.  Our put-in was at Craighouse with the intention of travelling south with the tide through the Sound of  Jura, then north along the west coast hoping to pass through Corryvreckan on the third day during neaps slack.

Sunday was a lovely and peaceful but healthy start of 37km to our first campsite in Glen Batrick. 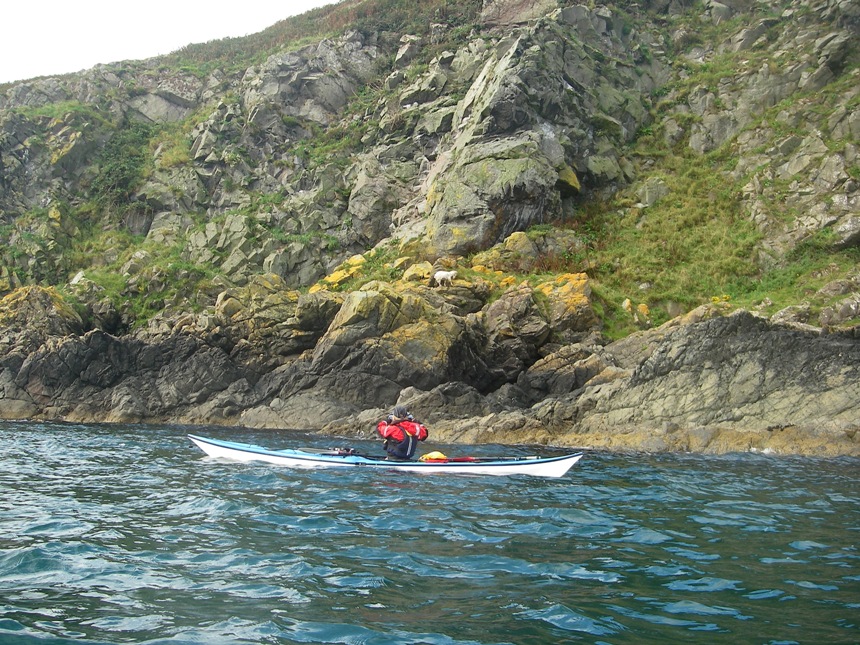 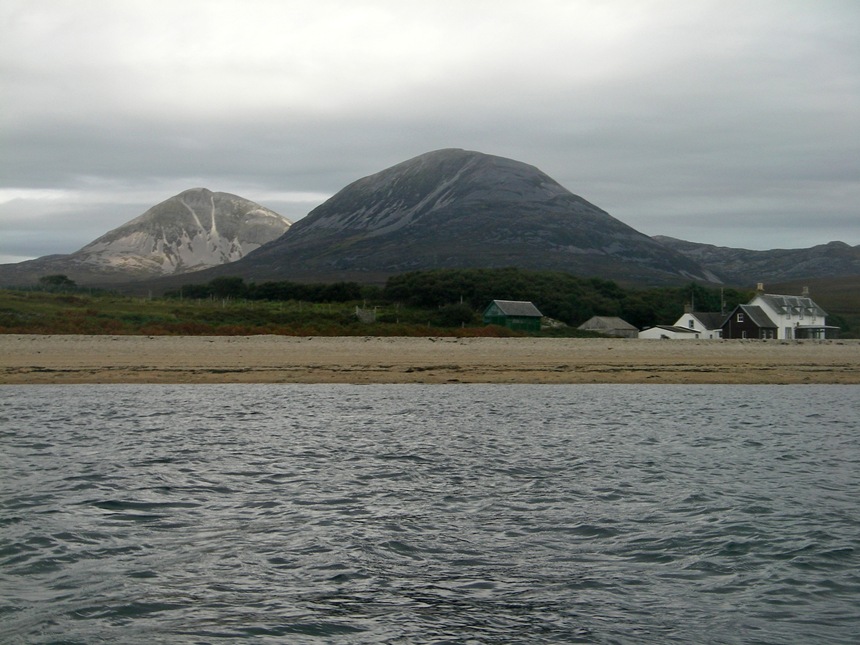 The Paps of Jura 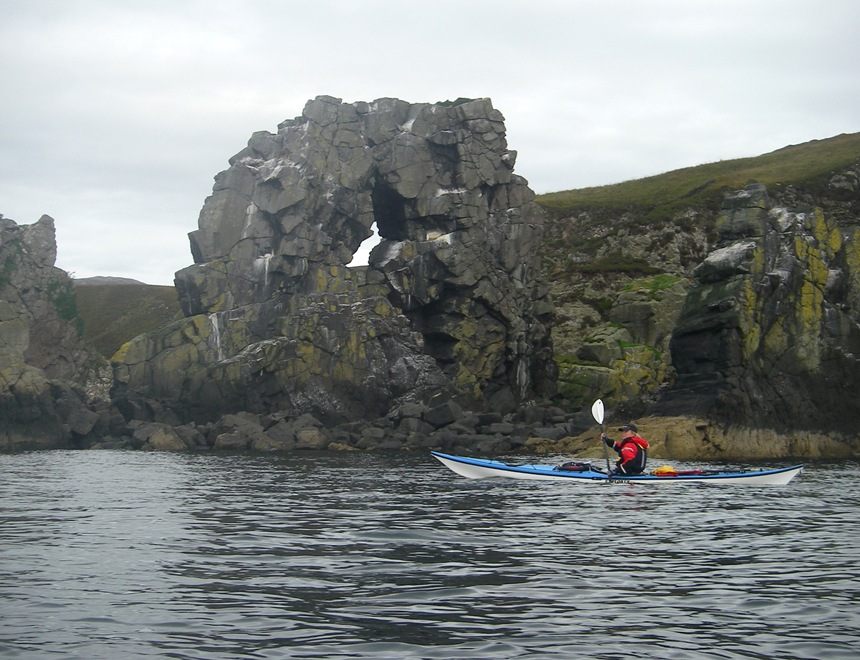 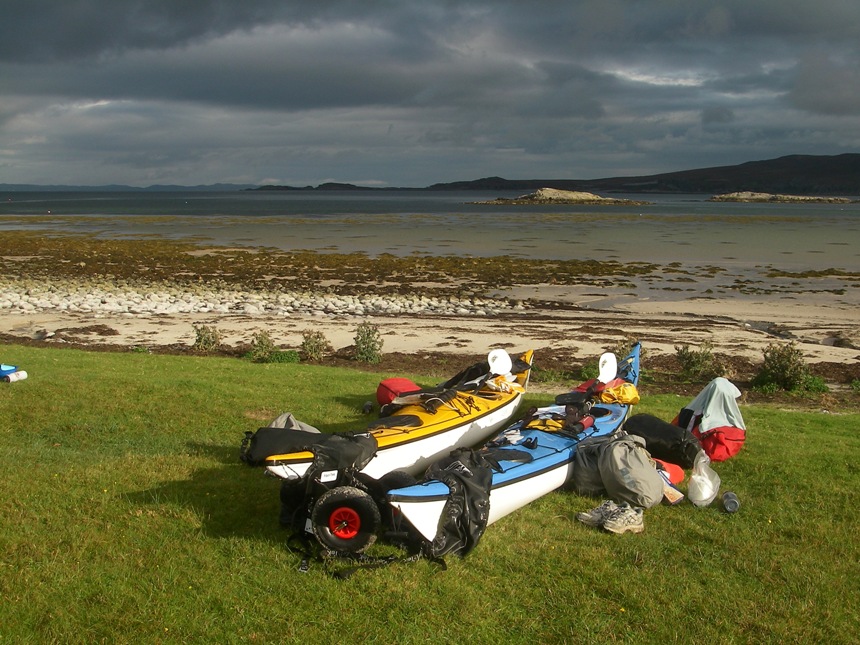 Heading north up the west coast on Monday was also calm and relaxing with light NE winds and no swell.  It was perfect conditions for exploring this fascinating coastline with its primitive beauty.

Reading up on the geology of Jura  we discover it’s made of quartzite.  The raised beaches were formed after the ice sheet which covered and depressed the land melted allowing the land to rebound leaving the beaches “raised” high.  The shape of the arches, caves and cliffs give a remote, prehistoric feel to the landscape.  Looking over towards the vast beaches of cobbled quartzite, you could almost imagine seeing a woolly mammoth or saber-toothed tiger watching us paddle past.

In reality we saw many herds of deer and of goats which seemed to live in the many caves.  Sea eagles, otters and a couple of  porpoises were also spotted.  After a mellow 27km, we camped at lovely Glengarrisdale Bay. 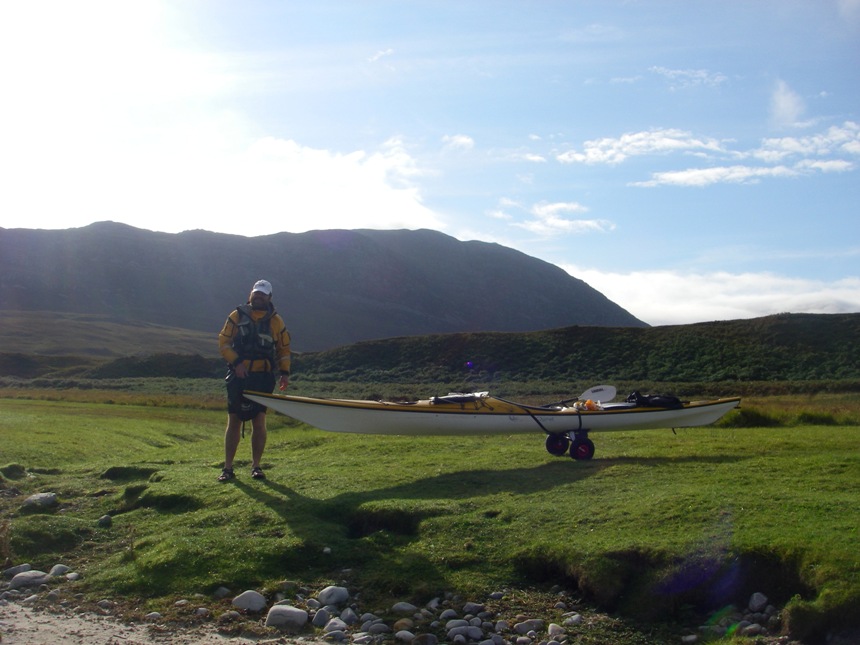 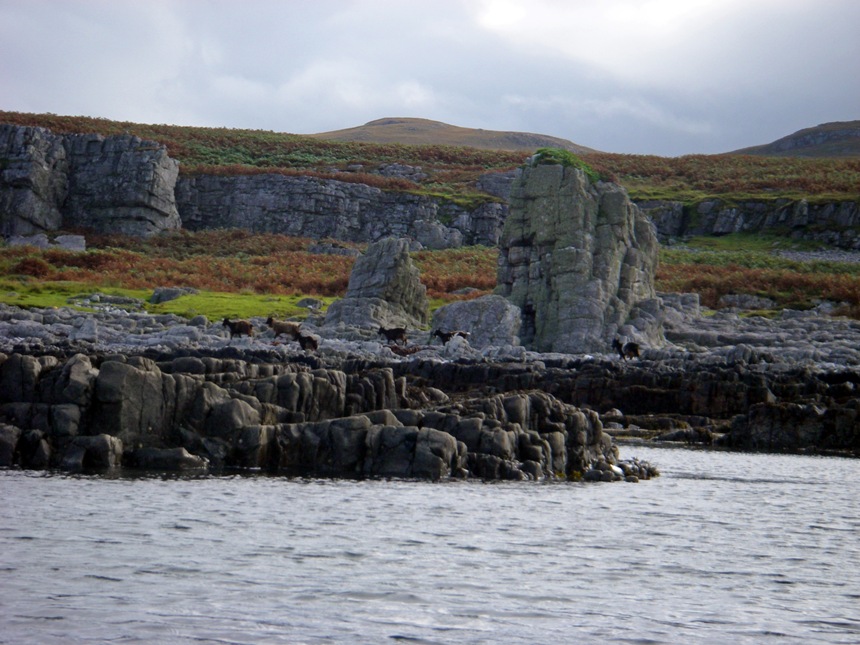 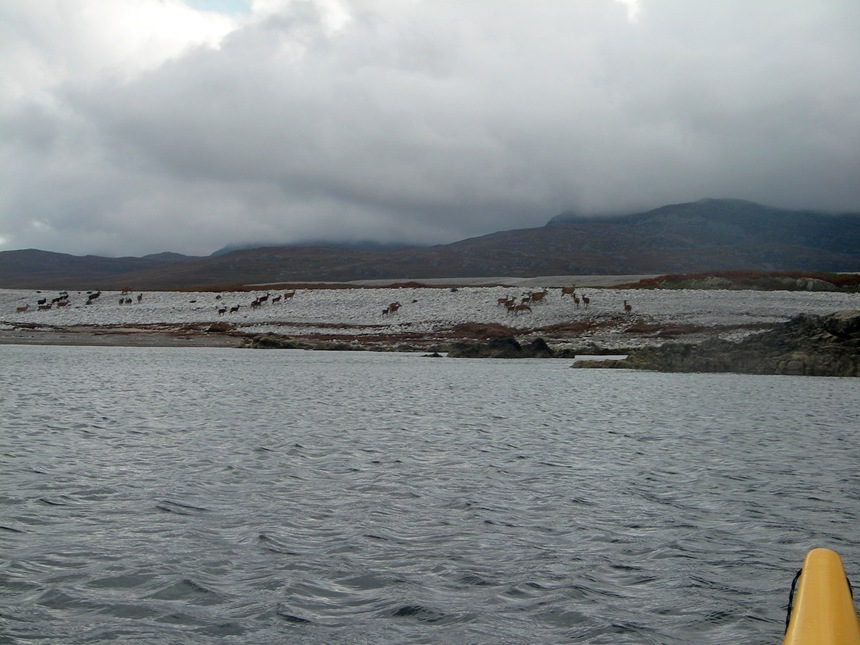 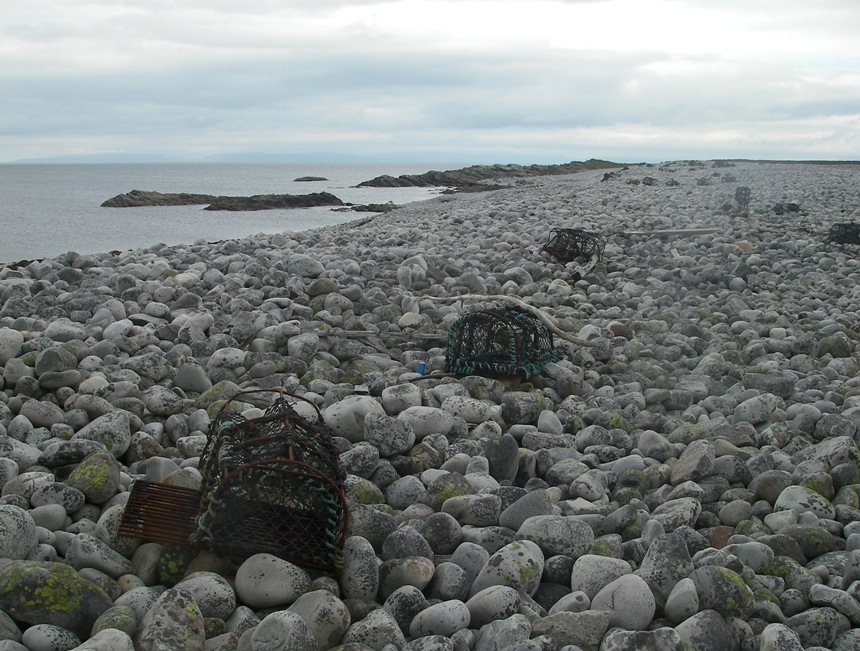 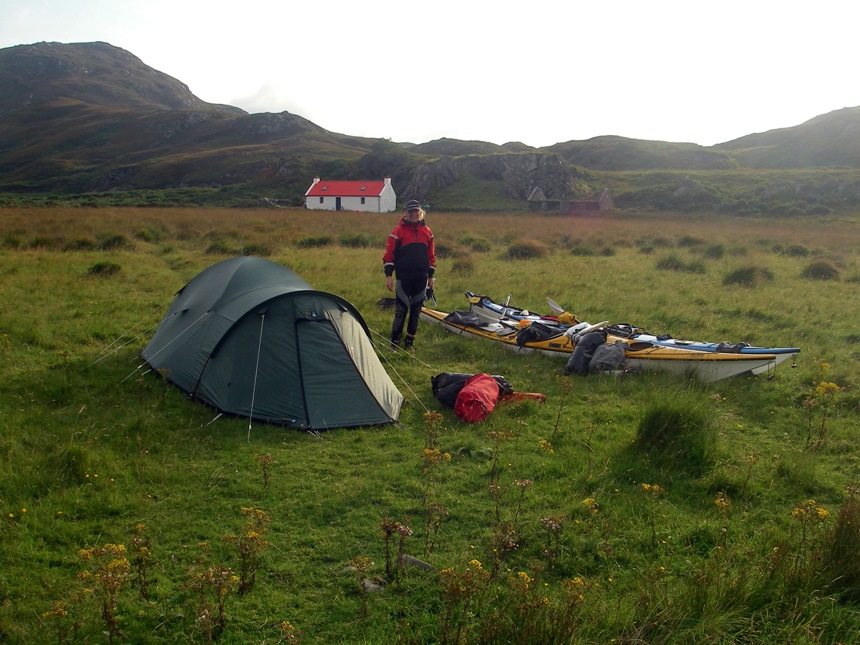 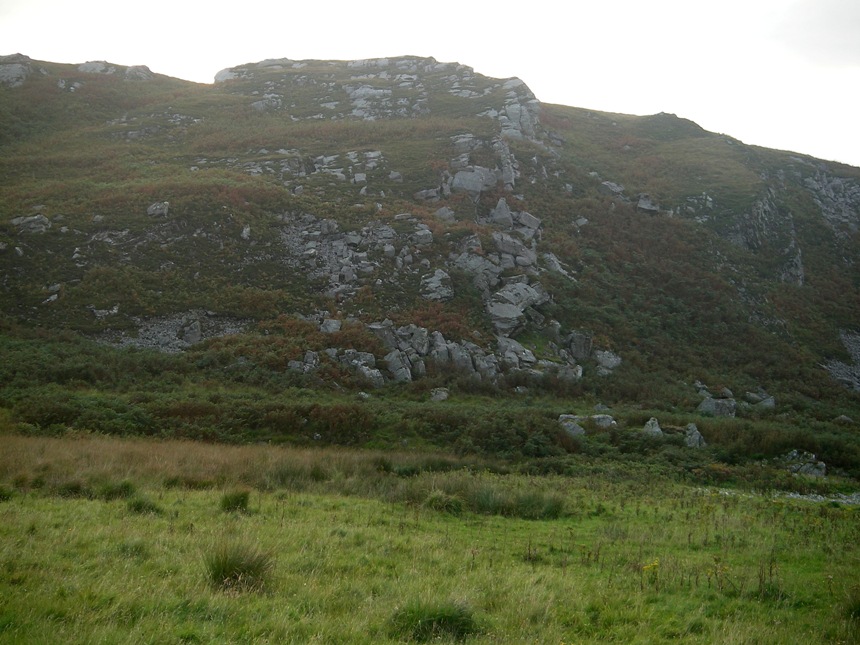 With the Coast Guard on strike and no mobile phone reception, we had no weather report for the first two days.  I relied on my barometer and cloud reading.  By the evening of our second day I noticed a brief appearance of small mare’s tails (cirrus), and mackerel sky (altocumulus).  Those who watch clouds know that these foretell deterioration (wind and rain) if there is a corresponding drop in the barometric pressure. The barometer hadn’t changed and there was still plenty of blue sky that evening.  The morning of the third day was the big day to go through Corryvreckan and we had to be there at l.00 pm for the slack period.  The sky still had a lot of blue and just before we left I looked at my barometer.  It had dropped by 2 mb.  Hmm.  Oh well, surely we can be safely through and ashore within the next two hours before the bad weather hits us.

An hour into our paddle and our NE’erly had backed to SE and the wind was strengthening as quickly as the sky was darkening.  We were entering the Corryvreckan – a sinister and malevolent place in which the wind together with the tide pushed a surging mass of steep, closely-spaced, shoulder-high waves against us.  (We arrived slightly early as it was not yet slack to avoid wind against tide if we took longer than anticipated and missed the slack period.)  We stayed close to the rocky coast so the eddies would help us.  We had to trust they were there because you couldn’t see them for the steep waves.  Some waves looked a bit more glassy than roughed-up and I believe those were in the area of the eddies.  We paddled hard in what was now a F5  SE  headwind.  As we passed the northern-most tip of  Jura and started to head south, the full horror of the situation emerged.  The entire Sound of Jura  was wild, heaving, hissing and completely covered in white tops.  The wind was shrieking at about 20-25 knots.  We were moving very slowly against the wind and waves and wondered how long our next two km to a sheltered landing would take.  We could turn around and go back to Bagh Gleann nam Muc but that would mean going back through Corryvreckan.  Suddenly, I spotted a small stony beach with a herd of goats watching us!  Stewart went in closer to have a look.  We must have been in another eddy because even though I had stopped paddling, I wasn’t being blown backwards.  When he waved me over I shouted with joyous relief!  This tiny, insignificant nick in the coastline on our OS map was labelled “Port nam Furm” in small blue letters.  It was literally our miracle “port in a storm”.  There are several of  these tiny ports around Jura and must have been used by fisherman in bad weather in the olden days.

Shortly after landing, Stew made VHF contact with a tourist RIB heading for the Corryvreckan and requested a weather forecast.  SE winds of  F6-7 were forecasted for  the day and the next two days.  Stew assured him we were okay and had a week’s worth of food.  We found a level, grassy campsite with a nearby waterfall, stream, and goats for company.  In the tent we continued to listen to the VHF and heard a yacht rescue in progress.  The Coast Guard captain exclaimed, “I’ve got 26 knots coming across my deck.” I glanced at my barometer which I keep hung around my neck.  It had fallen significantly (4mb) in the two hours we were on the water.  The alarm had gone off but I hadn’t heard it because of the noise of the wind and sea.

For the next two days we lived (and smelled) like goats – retreating to our cave (tent) when it rained and lazing on the beach when it was dry.  The goats loved eating seaweed and especially the brown kelp.  We had great views of the tidal races and watched the waves form and disappear with the different states of the tide.

We hiked up a trail on An Cruachan  and  watched the whirlpool and a fishing boat bob up and down hoping we didn’t witness it being sucked under. 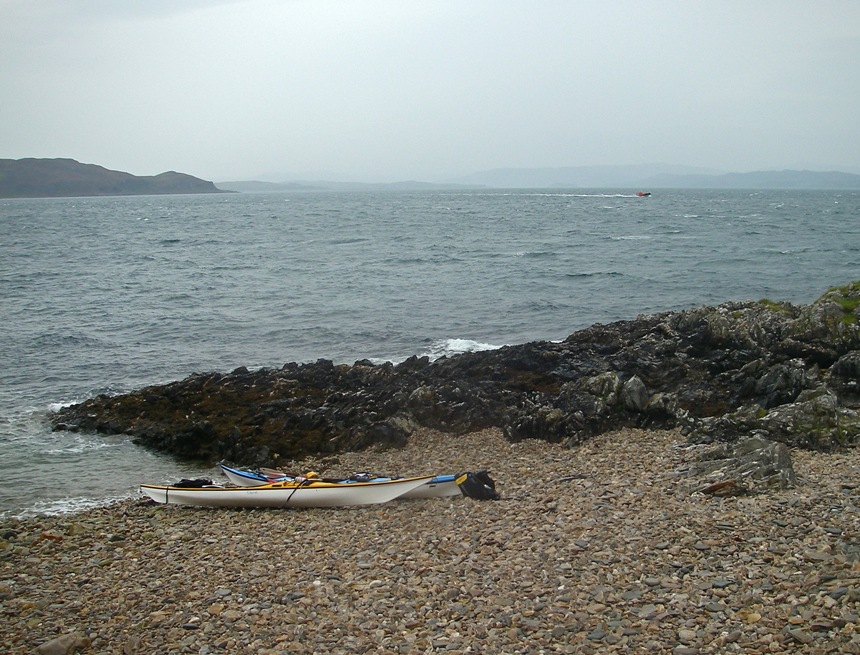 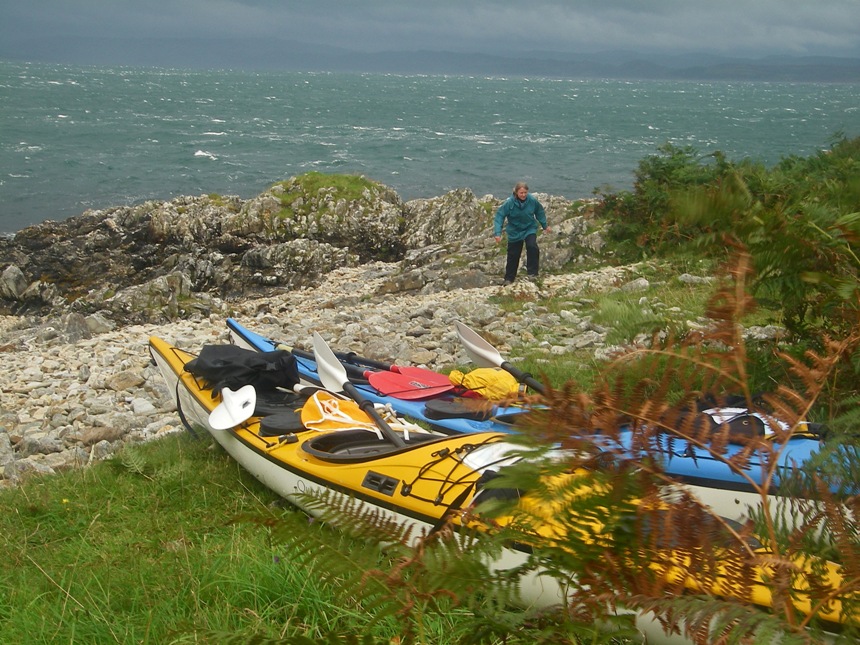 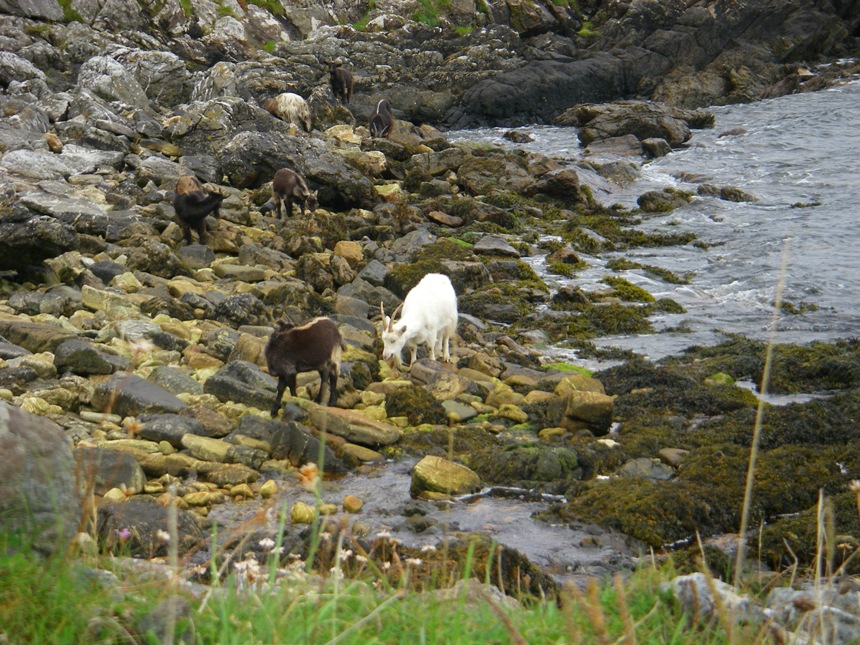 The Goat of Corryvreckan

Eastern end of Gulf of Corryvreckan 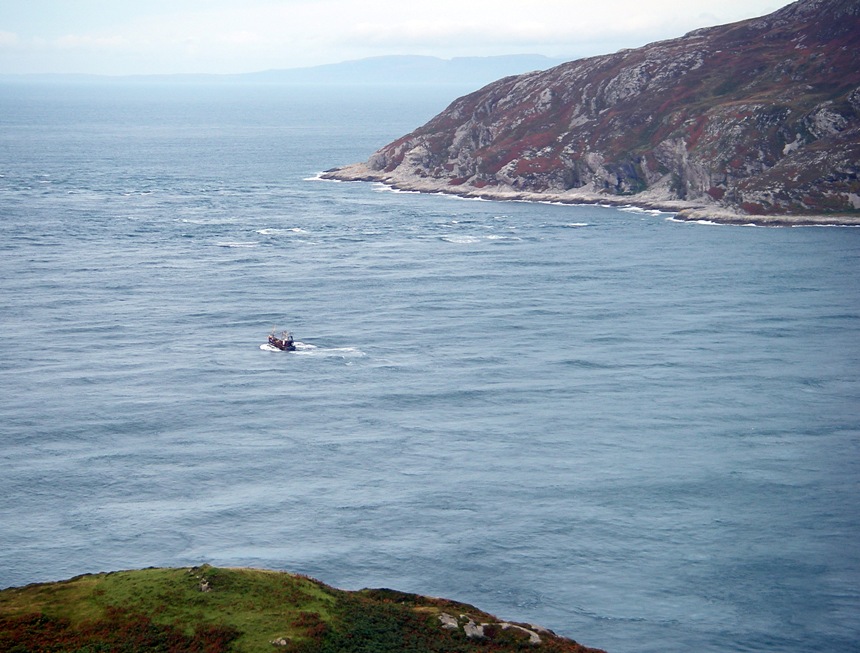 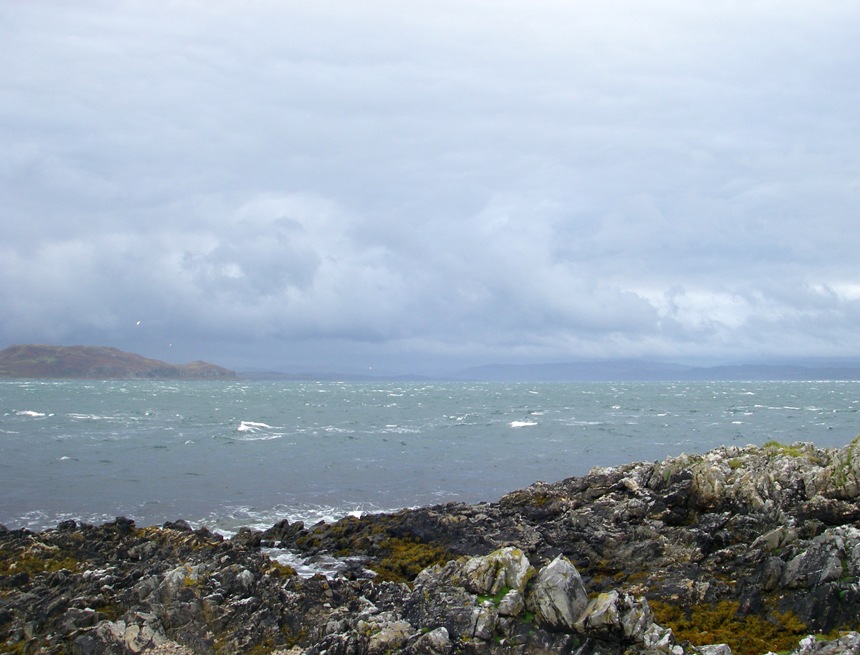 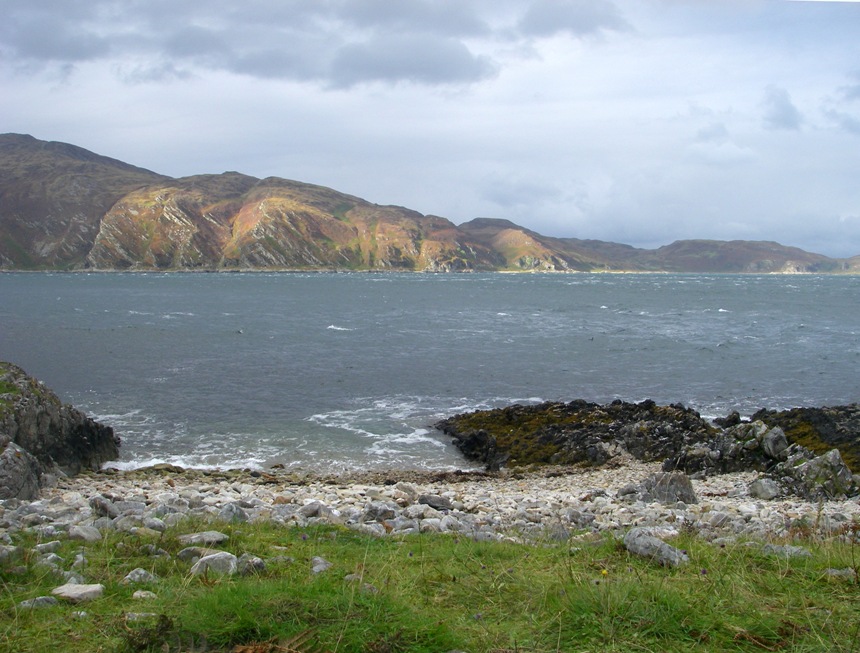 Shelter in a storm

As in most dangerous places, legends, myths and folklore are associated with Corryvreckan.  One legend says the “Hag” or witch washed her hair or plaids in the Corryvreckan.  Another ancient legend tells of a Norwegian prince named Breakan who fell in love with a princess of these islands and wished to marry him. Her father agreed to the marriage but only if Breakan showed his courage by anchoring his boat for 3 days and 3 nights in the Corryvreckan whirlpool.  One rope was needed for each day – a hemp rope, a woollen rope and a rope made from the plaited hair of maidens.  The first night, the hemp rope broke, but he survived.  The second night, the woollen rope parted in the fearsome whirlpool, but he lived.  The third night, the rope of maiden’s hair was set, but a severe gale broke the rope, the boat was sucked under and Breakan died.  A surviving crewman buried Breakan in a cave today known as Uamh Breacin or Bay of the Pigs.  The crewman made it back to Norway, told his tale and a Norwegian lady feeling terrible guilt admitted she was not a pure maiden after all and it was her hair that had weakened the rope.  Meanwhile, back in Scotland, Breakan’s loyal dog had survived and not knowing what happened to his master, roamed Jura, his huge paws creating the mountains there.  In a mighty leap he jumped across the Corryvreckan landing on Scarba and created the mountains there.  Still not finding his master he jumped across the gap between Scarba and Lunga but slipped and fell into a raging tide which is now known as the “Pass of the Grey Dog”.  This must be true because as Lunga is flat, the Grey Dog never made it there!

We were finally able to get mobile phone reception and after two stormbound days the forecast improved to southerly winds of 10 knots.  (Coast Guard was still on strike.)  The last day we were on the water by 6.50am to catch the last 4 hours of the ebb.  The entire Sound of Jura was now flat calm.  Being so close to Corryvreckan, our first hour was spent riding smooth, largish tidal swell waves that pushed us south.  By lunch we had covered 25km.  The east coast is less rugged and after 9 hours (some of it against the tide) and 42km, we completed our journey around Jura ending at Craighouse for a total of ll4km. 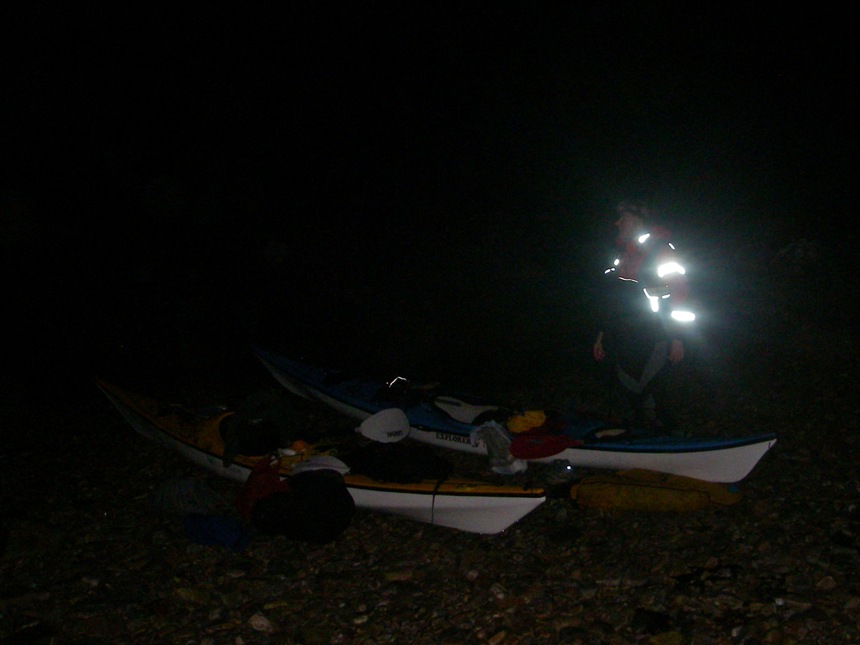 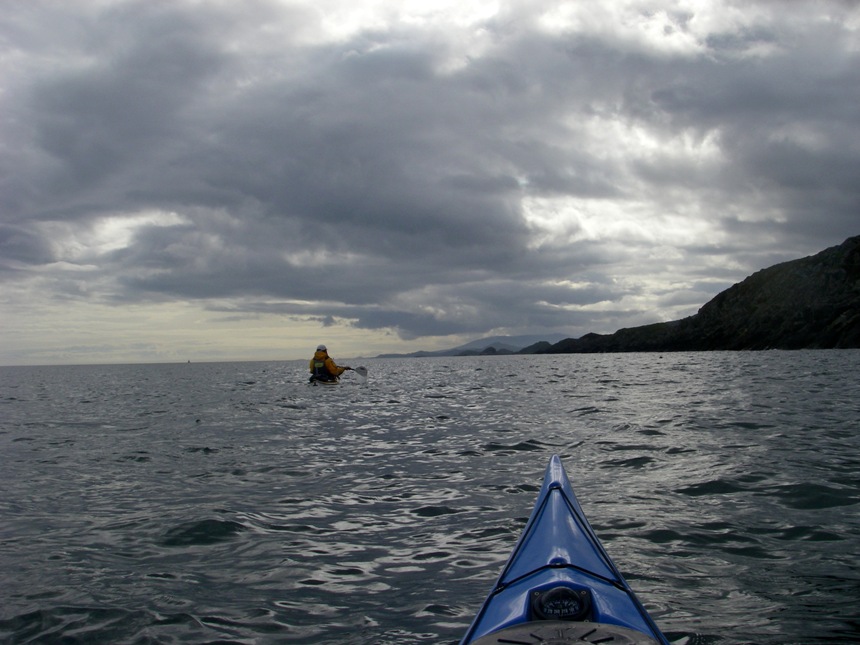 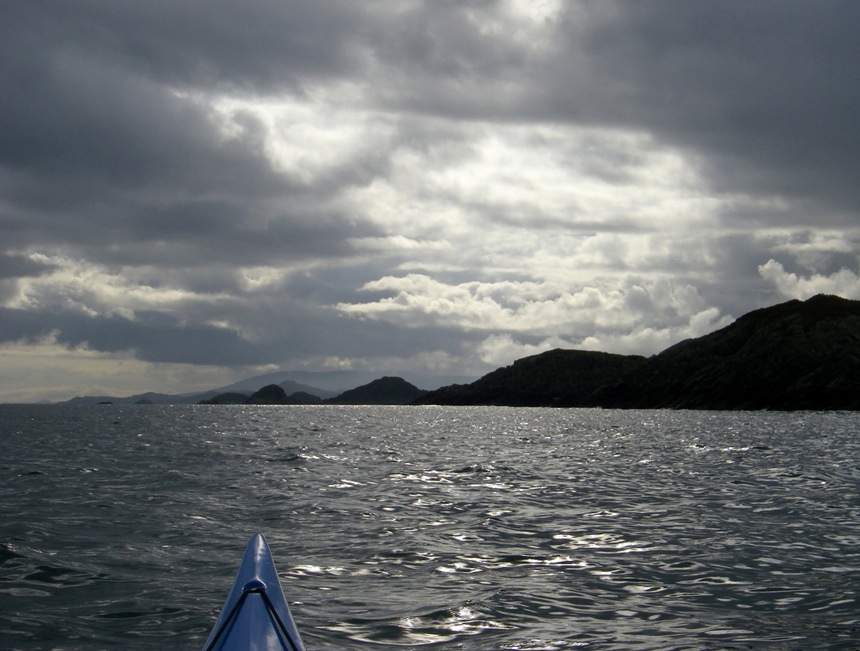 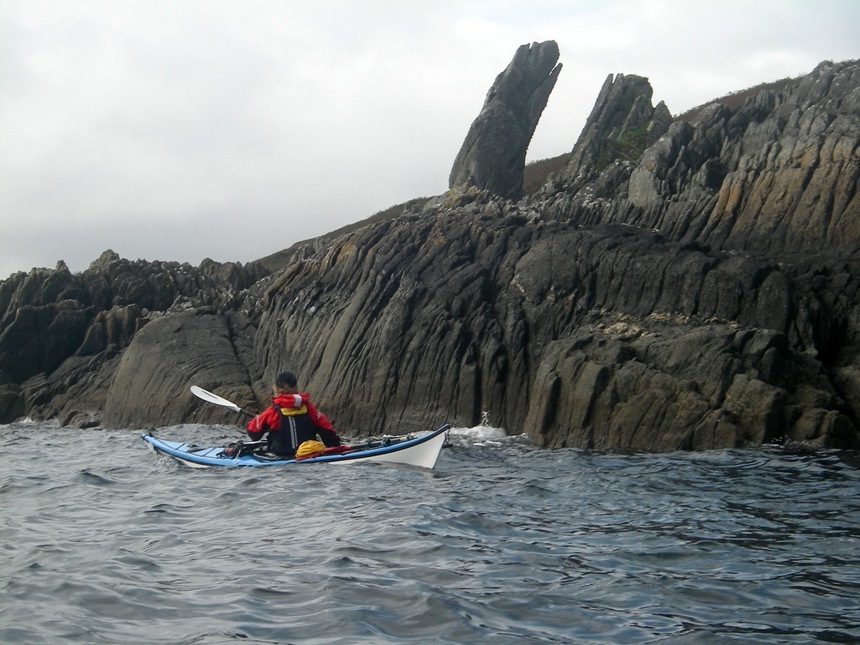 The Paps of Jura (from the east) 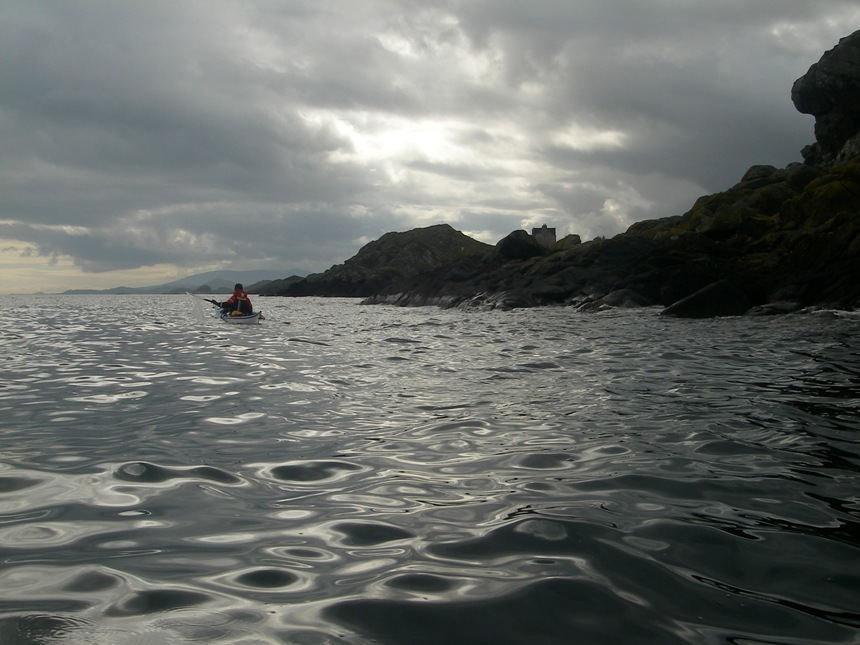 Our last day was spent on Islay on the Mull of Oa, where we visited a  monument built by the American Red Cross in memory of a shipwreck during WW1.

That evening we stayed at a stunning campsite and while looking out over powerful surf, contemplated on our exciting and memorable week on Jura. 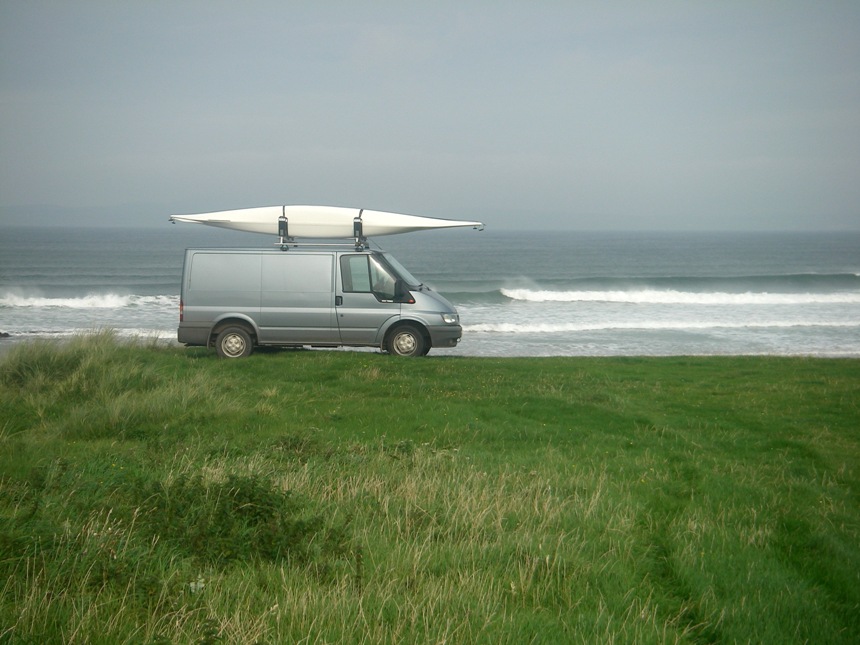 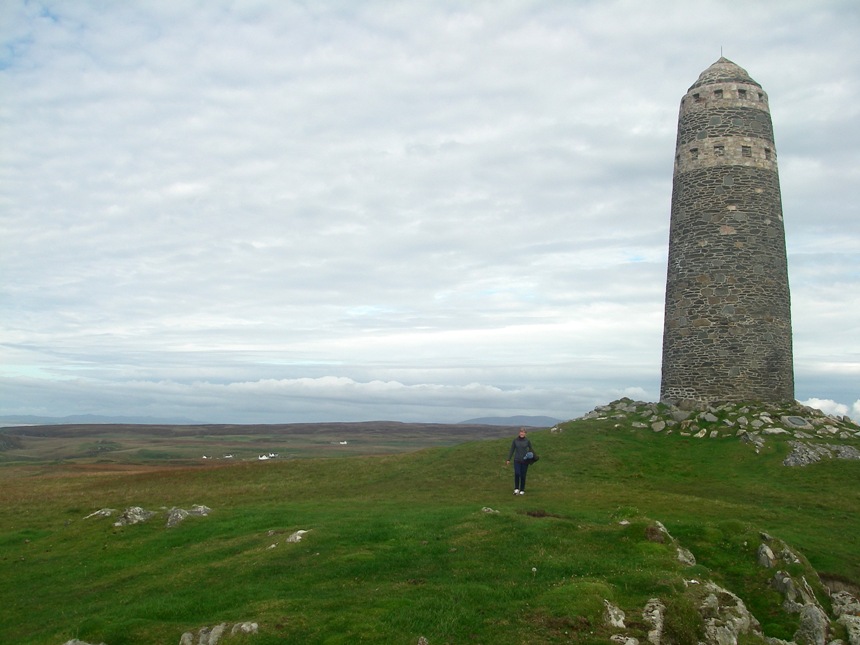 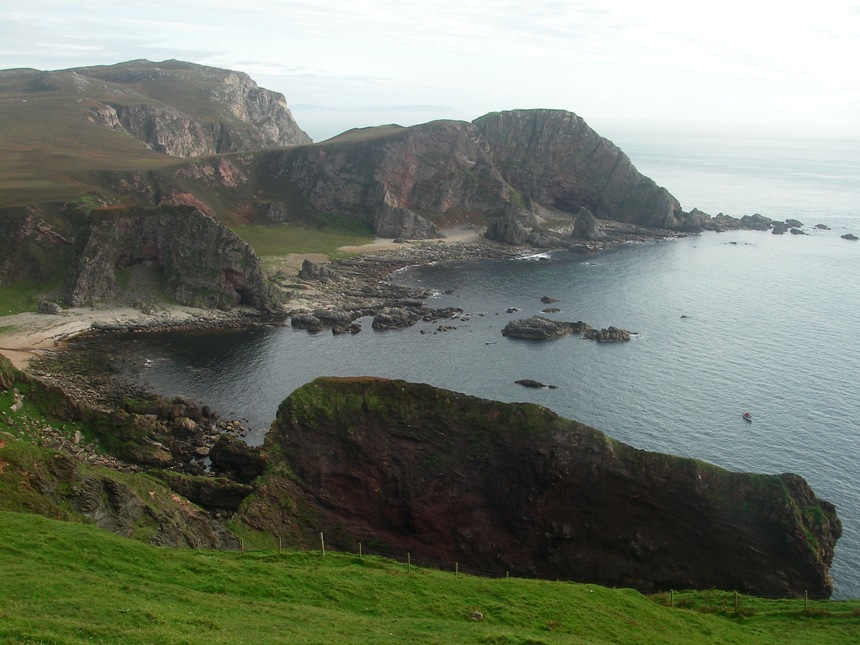 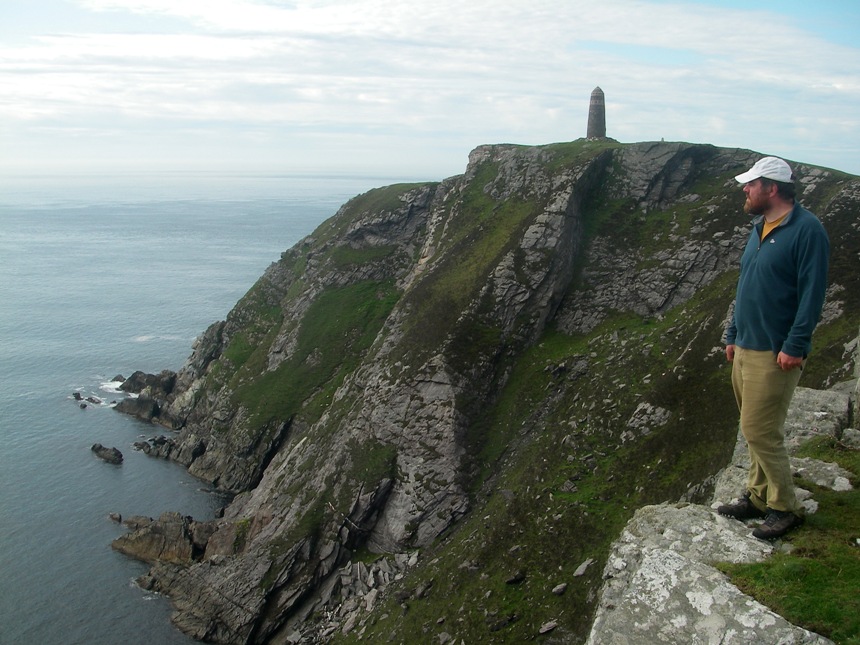 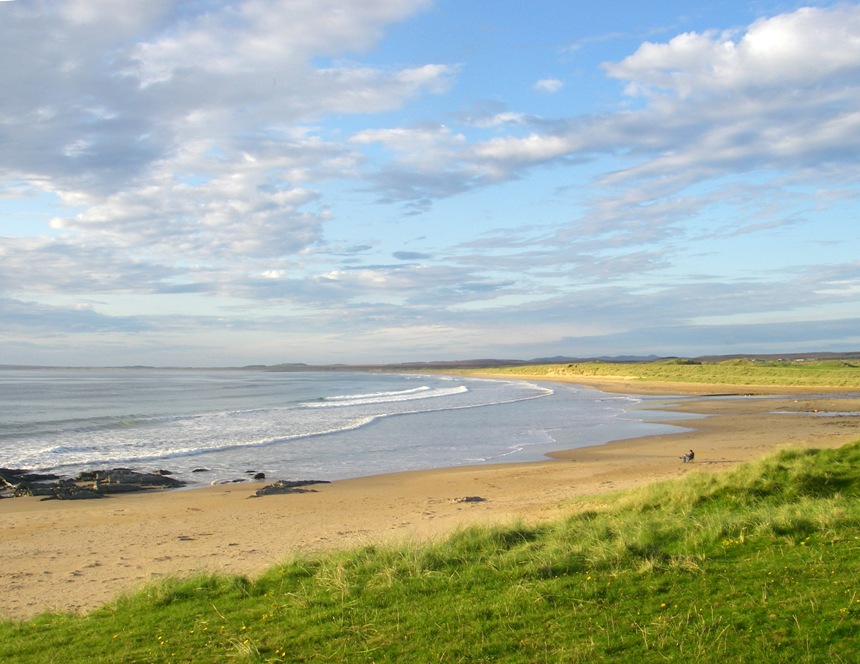 From the campsite, Kintra, Islay 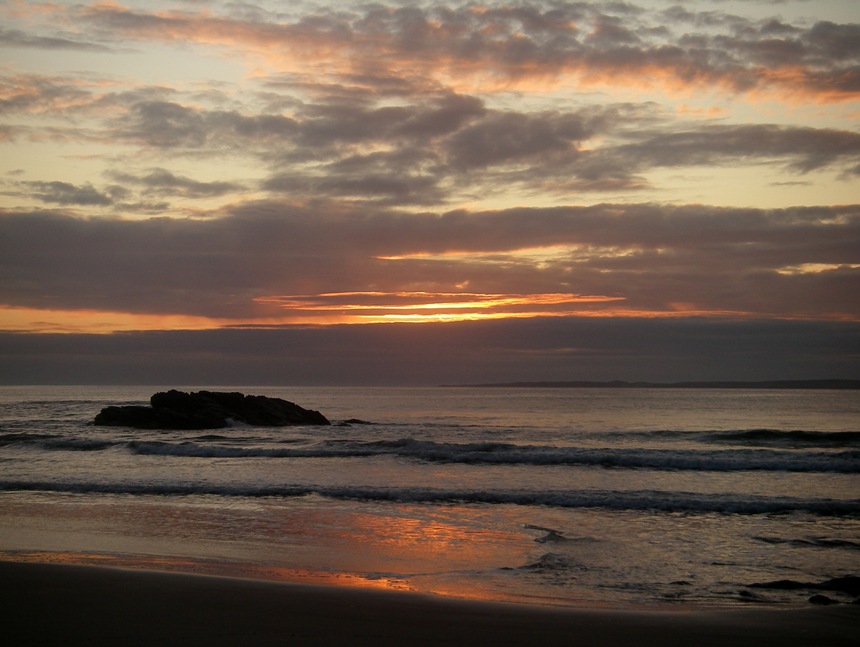 6 Responses to “The Goats of Corryvreckan 2008”