Stew and  I walked into a shop on Lewis for the first time in over a week and bought a newspaper.  I was shocked to read that there was flooding in the Central Belt, Fife and Ayr.  Apart from one or two really rainy days, we had bright sunshine, blue skies and sparkling seas.  People were frolicking on the white sandy beaches playing volleyball, swimming and even sunbathing!  The machair was bursting with purple clover, yellow marigolds and other little flowers I don’t know the names of.  Harris is one of my favourite places and the beaches there are more beautiful than the Caribbean, Greece, Florida, and California.  Our plan was to put in at E. Loch Tarbet and kayak around Harris finishing 3 days later at W. Loch Tarbet for a total of 80km.

The first day’s paddle was about 27 km to Linger Bay in great touring conditions, ticking off the miles with moderate winds and spring tides with us.  Linger Bay is a hauntingly beautiful place, previously threatened by the super-quarry proposal.   Unfortunately it’s recent history seems to have left a legacy as most of the croft houses were now empty and starting to melt into the landscape. 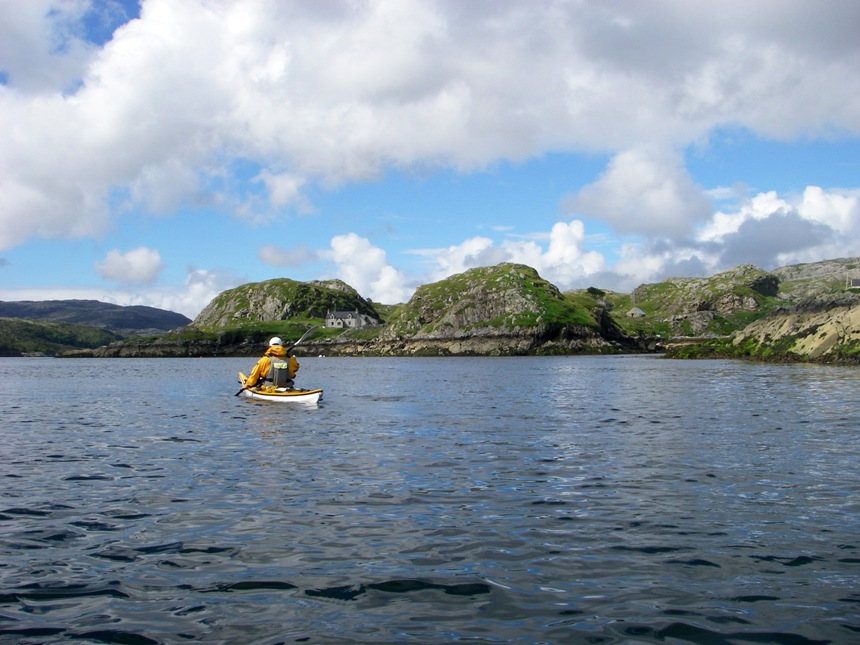 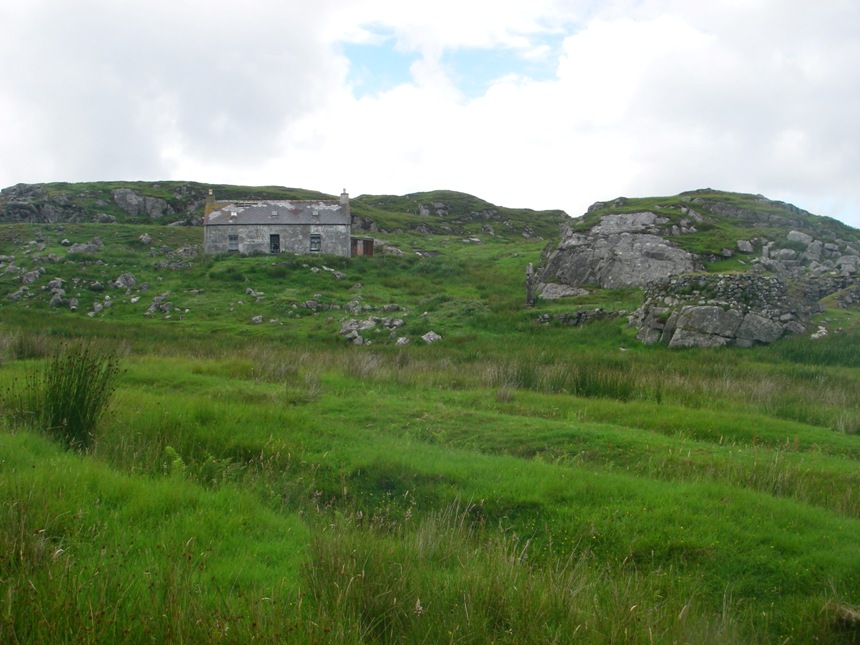 The next day we set off rounding the southeast end of Harris which again was not a lot of effort into the F4 northeasterly with the spring tides whisking us along. It was overcast with the odd gusty squall.

On the VHF radio, Stew heard the Coast Guard requesting permission from the Leverburgh ferry to participate in a helicopter exercise.  The captain wasn’t too happy and warned that he would have to change directions frequently.  The helicopter hovering over the ferry kept us amused, but much more serious amusement was to follow later that day.

We continued through the sound trying to identify the different islands when up ahead, I squinted to see several curious lines of breaking waves stretching across our path and out to sea for several hundred metres.  It wasn’t particularly rough where we were and it looked more extensive than just a few breaking waves over rocks or skerries.  The tide swept us closer and closer until…sh*t, it’s a tidal race!  There was no escape – we had to go through it.  Up, over, slam….up, over, slam…as my bow made it’s way over several rows of these steep, eye-level breaking waves.  A few boils and eddies greeted us also but the whole trauma was quickly over.  We arrived at a gorgeous beach just east of Rubh an Teampaill on the south coast of Toe Head for lunch.

Toe Head sticks out like, well a sore toe and is fully exposed to the Atlantic and we knew this may be the most difficult part of our journey.  We started making our way north in the lee of the NE’erly in very calm water.  Further and further north the sky became darker and the water rougher with the increasing swell bouncing onto the cliffy coast.  Once completely out of the lee, it was like we entered the twilight zone.  A strong F4 blasted us in the face and the sea became alarmingly wild and heaving.  Okay, settle down, I told myself.  Now is not the time for a nervous breakdown.  Head down, deep breaths, strong, controlled forward strokes and we’ll be around in about an hour. Then nature upped its game.  It was now fully a F5 and up ahead breaking waves were everywhere.  We were no longer making forward progress with both the wind and the swell waves against us.  It was getting a bit stupid to be out there so we gingerly turned our tails to the wind and had a whooping, surfing session on the fast-moving, following sea.  We ended up back at that lovely lunch-stop beach at Rubh an Teampaill where we set up camp. 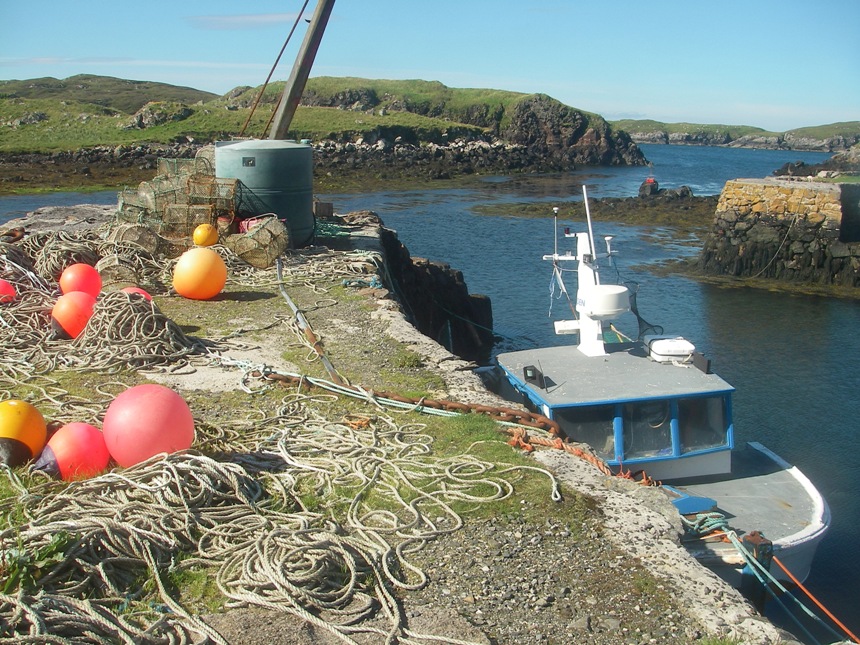 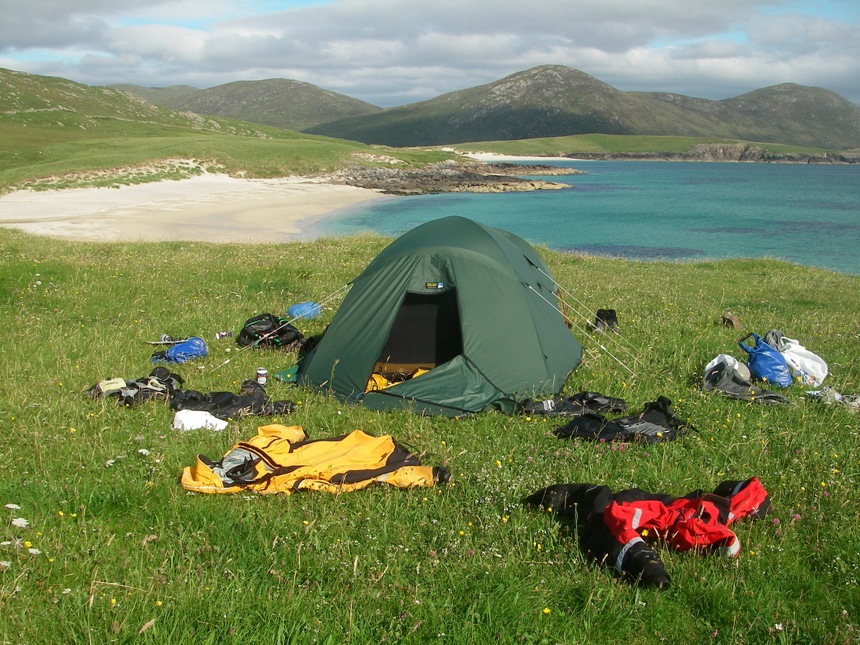 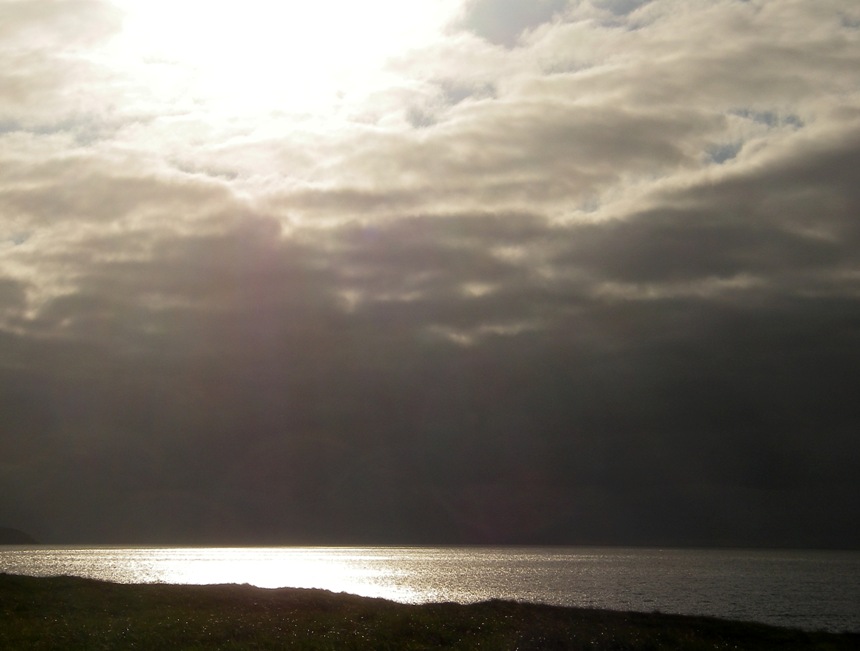 We stayed at Rubh an Teampaill for two days to wait out the F6-7 NE winds.  After a short paddle we were able to get to road where we hitched a ride back to Tarbet with a very nice musician with very long fingernails. 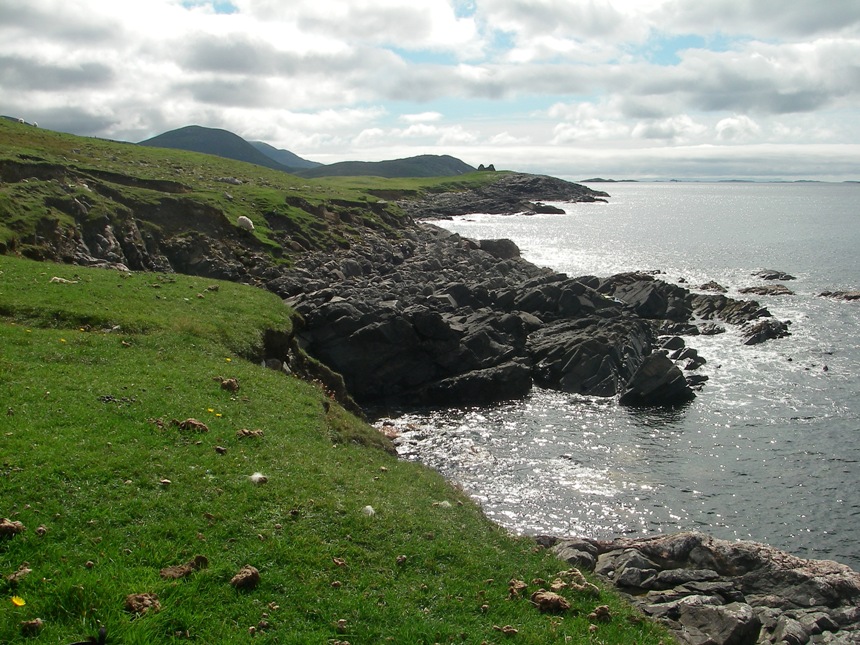 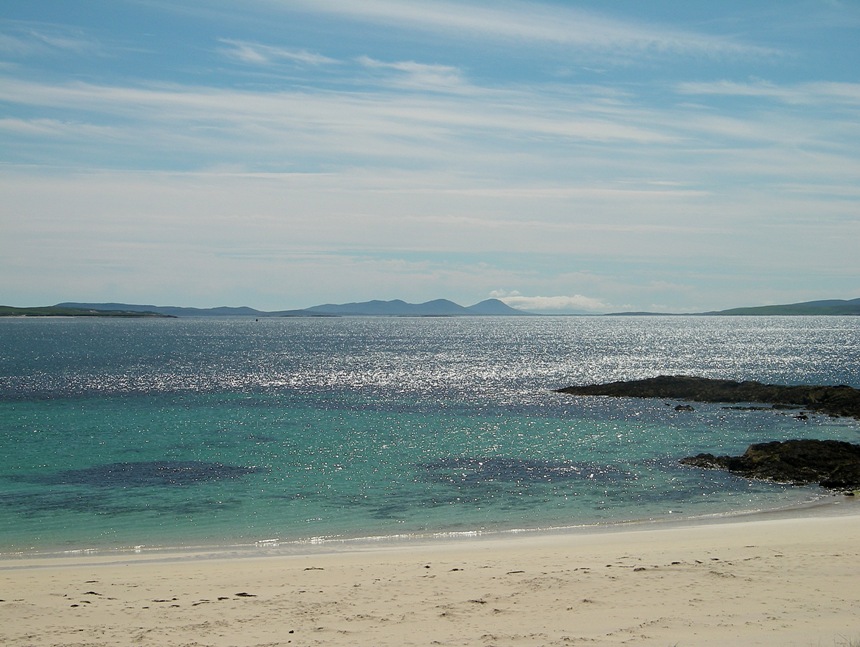 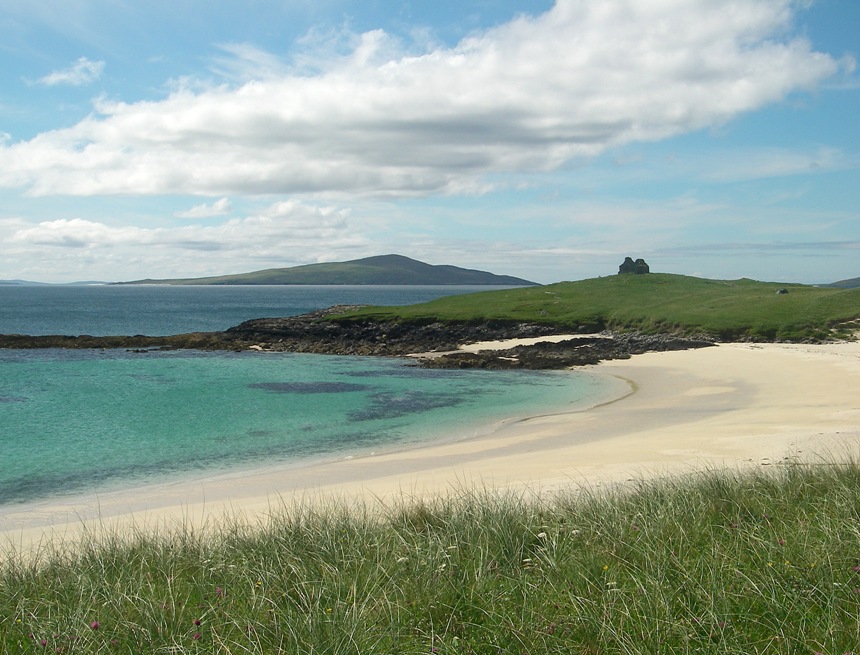 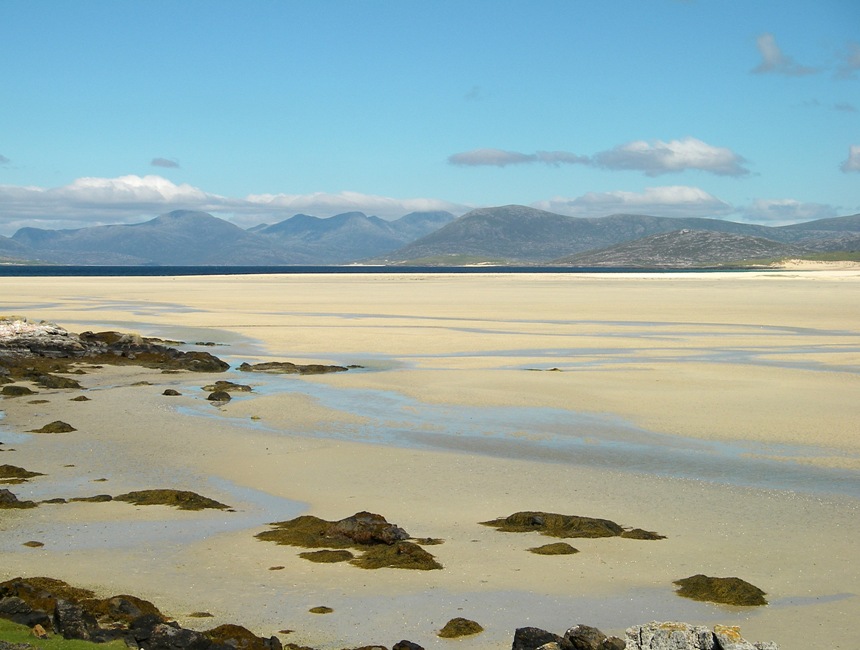 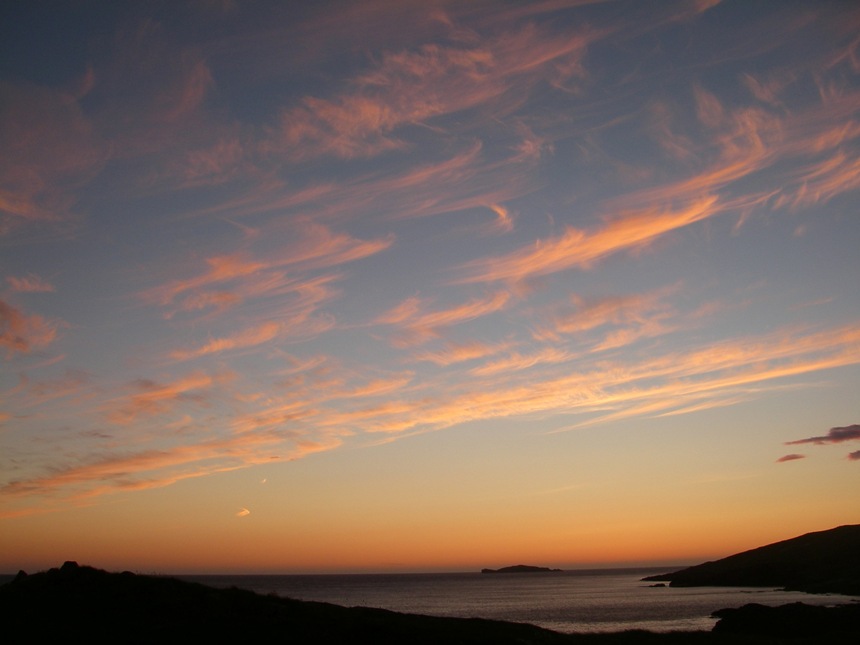 After several days, we came back from Lewis and finished the last leg of the Harris journey.  With the wind still from the NE, we thought we’d have a greater chance of success if we went from W. Loch Tarbet to finish where we left off on the south coast of Toe Head.  The north coast of Toe Head was still manic and bumpy, but the wind and swell helped us this time. The north-facing coast of the headland rose up magnificently and the power of the ocean was humbling.   We made it in time to catch a local bus back to Tarbet. 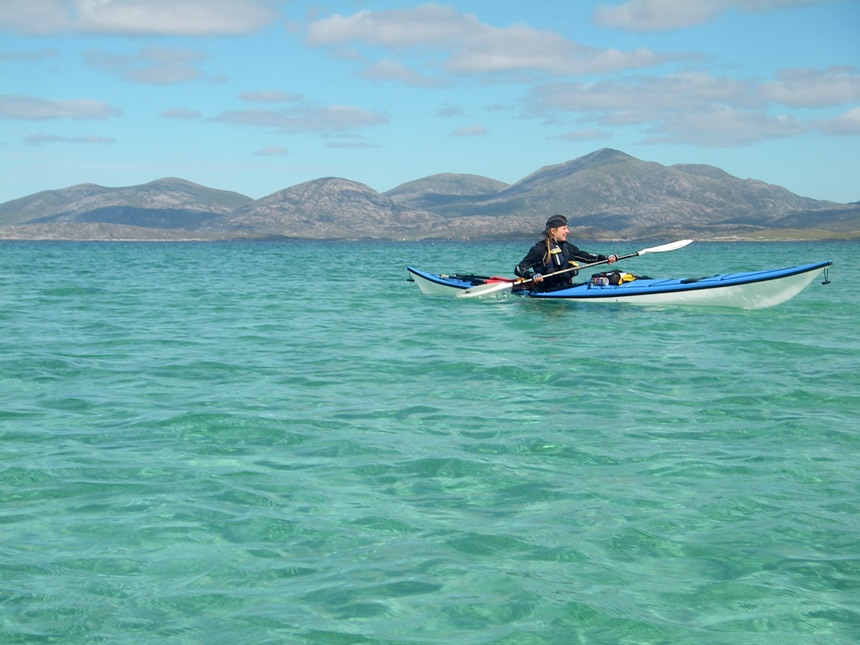